BIGGA Support Team Gear Up For The Open

Following Adam Scott’s dramatic victory at The Masters, attention now turns to the Open Championship at Muirfield in July – and over 50 BIGGA members are celebrating after winning a place on the Association’s Support Team.

Since 1984, BIGGA members have volunteered to prepare the golf course alongside the home greenkeeping team at the legendary event. Their role has gradually increased in importance in recent years and they are now tasked with everything from bunker raking to divot duty, all the time furthering their greenkeeping education. 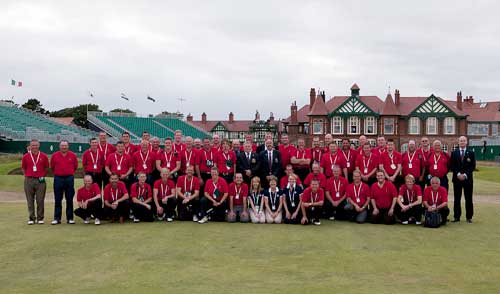 Of course, it’s also a wonderful opportunity to walk alongside the world’s best golfers as they bid to win the Claret Jug.

BIGGA’s General Manager Tracey Maddison said: “We have a volunteer team on the course from 4am every day from the Tuesday through to the Sunday, preparing the course – particularly the bunkers – alongside the home greenkeeping team for the day’s play.

“We then send out a member with each match to rake every single bunker the players land in and attend to any other greenkeeping issues. Then they can be out until 9pm or later on divot duty. The evening before each day’s play we have a random draw to decide who joins which players, so there’s real excitement as nobody knows if they will join a quiet morning round or follow the champion up the final fairway.

“It’s also a huge educational opportunity. They will always learn a new technique or way of approaching a problem from the home greenkeeping team and their fellow team members.”

Jaey Goodchild, Head Greenkeeper at Bowood Golf & Country Club, was one of the successful candidates selected out of over a hundred applicants and will be on the Open Support Team for the first time.

“I’m looking to get an insight into tournament preparation plus the presentation and operational side of things. I’m sure I’ll learn a lot from the week and maybe even bring some knowledge back which I can use on my own course.”

For a full list of team members – who are based across the UK as well as the USA and Vietnam – please visit www.bigga.org.uk