The seminar, which took place the day after the FA academy had been officially opened by the Duke and Duchess of Cambridge, was attended by the majority of groundsmen from the Premiership and also Wembley.

As well as being educational, the event created an environment where like-minded professionals could share experiences and be given a personal tour of the new site where Rigby Taylor are the main supplier of turf management products.

Tony Sinclair, Grounds Manager at Manchester United, said: “I enjoyed the day, it was a good set up and I’m very impressed with the new training camp. We had some useful information given to us, especially on nematodes, because that’s a big problem for all groundsmen. It was interesting to hear about the linemarking and we use the Stadium paint from Rigby Taylor anyway.” 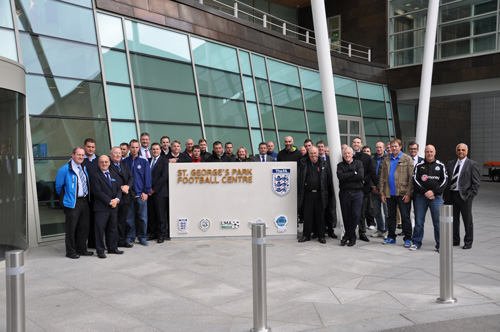 Dr Colin Fleming from Belfast University and Stephen Silvester, of Eagle Green Care, kicked off the day’s events with an in-depth look at nematodes. Colin stated that 97% of sand constructed pitches will have nematode issues and, in addition to Eagle Greencare, highlighted the importance of using biostimulants, such as Activate R, to reduce turf stress for their long-term control.

An outdoor demonstration with John Mallinson showed one of their Koro Top Drains in action, and Pro Leisure showed off some of their hi-tech test equipment used in the Pro Pitch System.

A much-anticipated part of the day was a tour of the St. George’s site by Alan Ferguson, Head Groundsman at the academy. Alan showed delegates around parts of the 330-acre site including the Desso Grassmaster pitch, made to Wembley specifications and indoor FIFA Two Star synthetic pitch.

Andrew Robinson, Sales Director at Rigby Taylor, said: “It was a successful event and the timing was perfect to coincide with the opening of St. George’s Park. Each of the speakers gave a talk that was both interesting and informative and we received extremely positive feedback from those attending. Thanks to all involved including Alan and Carol Ferguson for their organisation and showcasing the impressive new facilities.”