A party of 70 Ransomes Jacobsen guests and staff attended the Golf Industry Show in San Diego recently and were among the first people in the industry to see a prototype of Jacobsen’s new lithium ion ride-on greens mower. 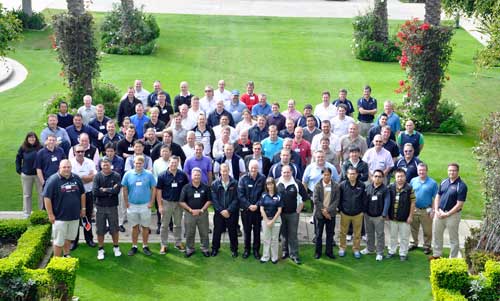 The current version of the Jacobsen Eclipse 322, is available in its hybrid configuration powered by either a small petrol or diesel engine running a continuous 48 volt generator or with a drop-in 48 volt battery pack. The new lithium ion battery power pack, revealed exclusively at the San Diego event provides enough power to cut up to 21 greens in a single charge.

The group for the five-day round trip was made up predominantly of greenkeepers from the UK and Europe, enhanced by others from all areas within the Ransomes Jacobsen marketing territory, which encompasses Iceland to India and beyond.

Following long flights to America’s west coast, the group relaxed on day 2 with a morning visit to the Midway museum, a retired USS aircraft carrier, where many veterans were on hand to recount tales of their time spent on the carrier during service in World War II, Korea, Vietnam and the first Gulf War. The afternoon was spent at Jacobsen Super Bowl party at the Hard Rock hotel; an interesting experience for those not aficionados of American football.

Day 3 began early with a coach transfer to the Park Hyatt Aviaria Hotel in Carlsbad, some 30 miles north of San Diego, for the first of the education events of the trip. Dr Karl Danneberger, Professor of Turfgrass Science at Ohio State University, gave a presentation on Putting Greens Ecology, followed by Karl Parry of Denbigh Golf Club in north Wales, who presented his research on frequency of clip, following a series of trials he conducted last season. Both presentations were very well received and attracted many pertinent questions, especially from the superintendents from New Zealand.

Jacobsen’s President David Withers then addressed the group, welcoming them to San Diego and providing an insight into Jacobsen’s philosophy for the short and medium term. Following the obligatory group photograph and an excellent buffet lunch, those playing golf transferred to the golf course and those not playing visited the club’s maintenance facility. Day 3 concluded with a return to San Diego and a group evening meal at the Hotel Solamar in the Gas Lamp district.

Another early start on day 4 saw the group heading to Coronado Golf Course for the joint Smithco/Turfco Demo Event where the two manufacturers presented their new products for the 2013 season. This was an excellent opportunity for the group to see the recent advances sprayer technology, especially the use of satellite navigation and top dressing applications, which can now spread wider and with exceptional accuracy. With the afternoon free, many of the guests took time out for sightseeing or shopping, before returning to prepare for Jacobsen’s hospitality event. This was held at the Fluxx nightclub, where over 900 guests were treated to an hospitable evening of superb entertainment including cirque du soleil-style high wire gymnastics and live music. 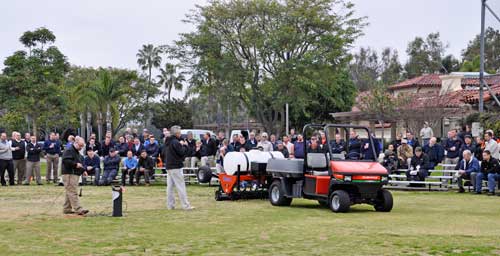 Day 5 was to prove a very long day and the culmination of the visit. The group assembled at 9 am and walked the two blocks the San Diego Convention Center to visit GIS Show, and the Jacobsen booth with its ‘Orange everywhere’ theme. On the walk in it was impossible to avoid the theme; pedi-cabs were touring the immediate district around the convention center resplendent in the ‘Orange everywhere’ branding and five ‘Muscle’ cars, similarly branded, were parked outside the Hard Rock hotel. Following a full day the show, the group returned to the hotel, collected their bags and were bussed to San Diego International Airport for the long flight home.

Jaey Goodchild, Course Manager at Bowood Golf Resort commented,
“What a fantastic trip! From start to finish, the education, going to the Show, and the overall hospitality were absolutely brilliant. The attention to detail and the organisation of the whole trip was a logistical triumph.”

Course Manager Stephen Oultram of Wilmslow Golf Club added,
“I must admit, I was surprised to receive the invitation as I’m not a Jacobsen customer, but I was delighted to accept it. It was such a relaxed atmosphere from the time we met up Heathrow until we returned five days later. The opportunity to be with a peer group of greenkeepers from clubs around the world and to be able to discuss different issues in a relaxed environment was invaluable. My perception of Jacobsen is from 10 years ago and on this evidence, they’ve changed beyond all recognition. On behalf of every one of the guests, I would like to thank Ransomes Jacobsen for this excellent opportunity.”

More information on the product offering can be found at www.ransomesjacobsen.com.