A Winter Warmer For The Turf Industry

BTME 2013 has proved a real winter warmer for the turf industry with six thousand visitors pouring through the doors during a vibrant week at the Harrogate International Centre.

Professionals flocked from across the globe to the busy halls and first-class education seminars and workshops to give the whole industry a real shot in the arm for 2013. 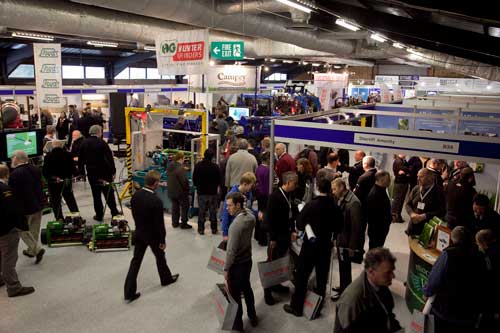 BIGGA’s superb education seminars and workshops began on Sunday and Jonathan Knight, greenkeeper at Llanishen Golf Club, attended the ‘So You Want to be a Golf Course Manager’ workshop.

He said: “It was extremely enjoyable, professionally presented and has given me all the skills I need to progress in my career, and I’ve met so many greenkeepers from across the country as well.”

Harrogate experienced significant snowfall overnight on the Sunday – but this did not deter the many delegates at the Turf Managers’ Conference, and the weather had improved by Tuesday.

BIGGA Chairman Tony Smith cut the ribbon to officially open the exhibition, and while hundreds of visitors enjoyed the Ryder Cup themed seminar featuring the likes of Curtis Tyrrell from the Medinah Country Club, thousands of visitors from the UK and overseas filled the halls.

However, day one proved to be just a taste of what was to come as Wednesday saw the halls crammed with even more visitors – with countless new business deals struck and friendships made.

Duncan Clarkson from County Sport Surfaces was a perfect example. He said: “BTME 2013 has turned us from a national company into an international company because we received two orders from Germany. Booking for next year is a no-brainer.”

Caroline Carroll from Syngenta added: “We’ve been really, really busy particularly on Wednesday. Everyone’s been incredibly enthusiastic and my colleagues have said it’s been one of our busiest years here.”

Measuring up to knapsack calibration

Get ahead of the game at SALTEX