Eight students from The Harefield Academy in Harefield, North London, have just been successfully assessed for City & Guilds Level 1 in Horticultural Skills as part of the Institute of Groundsmanship (IOG) Apprenticeship scheme.

As result, one student has already secured a job in the horticultural sector, while others say they have been “inspired by the course” and will now go on to higher level studies or apprenticeships.

The ongoing success of the IOG-inspired programme – which started at Harefield in September 2010 – is solid evidence that young people can and do show a positive and enthusiastic approach if they are supported correctly by education providers, tutors and industry organisations like the IOG. 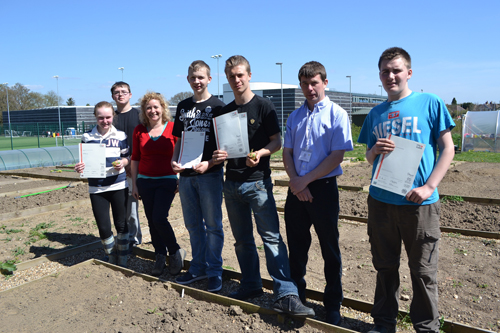 The Year 11 teenagers – one girl and seven boys who initially started the course on a Special Education Needs programme as part of the school’s main curriculum – have gained their Level 1 Certificates via accreditations from a choice of 61 units. Their Level 2 accreditations will include plant biology, soil science, organic vegetable growing and the maintenance of horticultural machinery.

Harefield tutor Louise Dunton said: “We went down this route to provide students with the opportunity to achieve and re-motivate themselves, to help them achieve. It was also building on an interest they already had in an allotment, which has now increased even further.

“As students they became a team and it changed their self-belief. Indeed, some have said that without the course – which involves three hours a week throughout term times, though some also attend during holidays – they doubt whether they would have stayed in school!

“We are very proud of them, both in the way they behaved and in what they have achieved,” she said.

Louise explains how the City & Guilds course, which is facilitated by the IOG under its Apprenticeship scheme and involves a maximum of eight Harefield Academy students each year (and has gained eight new students at the start of each new school year), has blossomed since its introduction and is now acknowledged as an excellent vocational course for any pupil aged 14 and over.

“The first-year students started with allotment plots, but we now have our own ‘site’ at the Academy. This encompasses a classroom (a revamped maintenance shed), a polytunnel, a number of raised beds and a storage area, for example.

“The students have steadily progressed developing a special garden of reflection and vegetable growing site, and winning Hillingdon In Bloom recognition, for example. The plan for the future is to add a turf nursery and a mini orchard.”

She continues: “We’ve had lots of outside help to fund the programme, underpinned by the irreplaceable mentoring of IOG Board member Richard Ayling, who is grounds manager at neighbouring Merchant Taylors’ School.

“Richard started me off on the programme, encouraging me to become accredited as an IOG assessor and he initiated the support we’ve received from companies such as Browns, Harrods Horticulture and Sports E-quipment.

“Richard has also fully supported the students on their various fact-finding trips to, for instance, Twickenham Stadium, the All England Lawn Tennis & Croquet Club at Wimbledon and to the Sports, Amenities, Landscape Trade Exhibition (SALTEX) show at Windsor Racecourse. In addition, Merchant Taylors’ School provides work experience for the students and Richard visits us regularly to keep up-to-date-with our progress.”

The recent Level 1 assessments were carried out by Louise, a trained IOG assessor, who adds that Harefield has now developed an appropriate package of teaching course material, which is scheduled for commercial launch soon.

IOG CEO Geoff Webb said: “On behalf of the IOG, I extend our appreciation of Louise and her outstanding ability to motivate and encourage these students. Each student I hope will go on to a great career. It is vital that we continue to develop young people and promote opportunities in our industry.”

Spruce up your team’s knowledge in just two days